On Sunday March 25, the University of Western Australia sims held the awards ceremony of what will probably be their final major art competition, the SLArtist@UWA Machinima Challenge. Seventeen entries were made by various artists such as Bryn Oh, Secret Rage, Chic Aeon, and others, for a total prize pool of 430,000 Linden dollars. The winner was Glasz DeCuir. who took the grand prize of 75,000 Lindens.

"This is not a continuation of the MachinimUWA series, which ended in Dec 2015," their blog stated earlier, "but is a special event that has a life primarily thanks to LaPiscean Liberty, who wants to nourish the dynamic partnership between artists and filmmakers."

"Jay Jay announced that after 9 long years of helming art and film challenges, that this would be his last, drawing to a close the UWA chapter in leading art and film challenges in Second Life, with hopes, the baton will be taken up by others, in the same way he and UWA stepped in when some or the original luminaries of Second Life were pulling back."

The second place prize went to Tutsy Navarantha for "Serendipity." Third place went to Natascha Randt and Karima Hoisan for "The River of Forgetting." Fourth place went to Isabelle Cheren for "Before the World Was Made." Fifth place went to Bryn Oh for "Cerulean."

The sims themselves will remain up for now, though it seems they are likely to vanish after mid-2019. 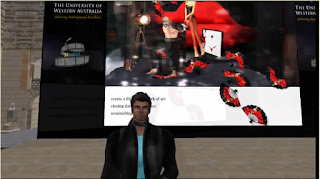 JayJay Zifanwe gave a speech at the ceremony. He expressed sadness not just for this being the close for the final event, but for the recent passing of Alizarin Goldflake. She was one of the first artists at the UWA, and her "Maze" can still be seen at the sims. Of the closing, "it brings to an end the grand art and film challenges run by UWA, which started almost a decade ago in 2009, with Alizarin and other pioneers, who included Soror Nishi & Oberon Onmura. In the past there had been tough times and moments when it looked we wouldn't make it this far, but we scrambled and pulled through."

"Its been an absolute pleasure for me to work with all of you over the course of these challenges, and over the years, and especially to those who went above and beyond the call of duty to make all of this a success. ... More than 50 nations with 6 of the 7 continents of the world represented."

"It has been an honour for me, the accidental art and film caretaker over the years to work with so many of you and have the privilege of viewing your art and film. The relationships built here have crossed over to RL as well, as I have met a number of artists and filmmakers from SL in RL, with FreeWee Ling spending a few months at UWA on an Australia-US Fellowship as well. The people of SL have helped my older son win a number of Peoples Choice events, as sometime over the past 2 years he suddenly became quite a successful filmmaker being selected for 4 Academy Award qualifying festivals, and when I travel to Denmark this July with my younger son for the World Triathlon Championships, another SL artist has offered to put us up for a while and show us around. Life has been definitely richer because of my involvement with SL, and I hope the friendships created will last well beyond the middle of 2019, when the digital night is likely to set on the UWA sims themselves. Thank you one and all."

To see the full list of videos, and read the transcript of the ceremony in full, check the UWA blog here.