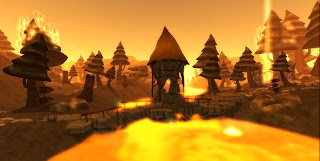 The first of Second Life's big games created by Linden Lab is getting an update.

Linden Realms now looks ablaze. Buildings and trees are now on fire. The once blue skies have an orange hue. Just what happened here? It seems that the antagonist in the "Tyrah and the Magical Glytches" game, Ruth, has used Magellan's coffin to knock a comet off course and sent it into the Linden Realms area.

The gameplay itself remains the same, go to Tyrah's base to accept missions, collect crystals, and avoid dangers such as fireballs, poisoned water, and all of those rock monsters. And you'll be getting a few Linden dollars for doing so.