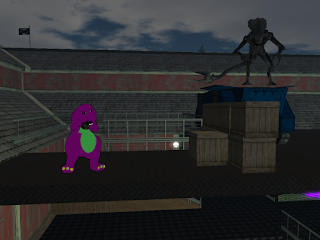 Remember when the Zeta Valley Club had to deal with an alien invasion? It seems the aliens came back and they had an ally: Barney the Dinosaur.

"Bix, you missed the epic Barney battle," Geerkil told me. "Yes what a war," LS Raccoon added. "Happens when you are not here to cover it. the aliens came back." Apparently Clockwork Jackal and his friend Biohazard were dealing with a second force of aliens, smaller than the first one that hit a few weeks ago. Unfortunately, more trouble showed up. "Then all hell broke loose," Geerkil told me. What was the form of the hell? It was Barney. 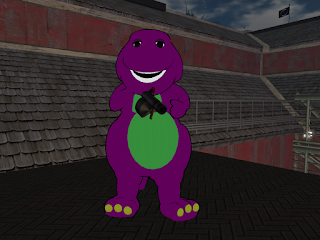 Yep, the purple dinosaur who sings songs that brainwash little kids into loving him and sends adults running away screaming came to the club as the fighting with the aliens started up. The purple horror would be a nightmare in itself. The good news, no one had to deal with the accused music that works on the brains of adults like sandpaper and has proved an effective interrogation method at Guantanamo Bay. The bad news, he was sporting a weapon, and joined the fight by firing at the club's defenders.

"Barney armed with a grenade launcher took on two foes," Geerkil told me, "Barney was defending the aliens." "Yeah, he was battling Biohazard and Clockwork," JB Raccoon added. 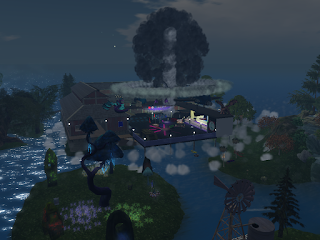 Clockwork and Biohazard might have been able to repulse the aliens with firearms alone. But with the dreaded purple monstrosity added to the assault force, it was decided there was no choice but to use their weapon of last resort: a mini-nuke. So like the first battle with the aliens a few weeks ago, this battle ended with a mushroom cloud over the club. When it cleared, the aliens, and the purple nightmare were gone. By morning, the radiation levels were back down, and all damage was repaired.

While these particular aliens may have been disposed of, Barney is assumed to have survived the nuke. Such abominable evil has a way of surviving to strike again.