More on the Return of Last Names, Expect in Late 2018 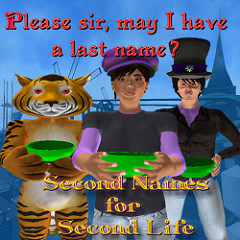 Last Wednesday, Linden Lab announced a number of upcoming changes to Second Life, including the return of last names to accounts. Since then, more details have come in about Linden Lab's plans on the issue. Oz Linden was asked about the topic at the Content Creator User Group meeting on Thursday March 22, and he answered some questions about it.

Of when surnames reappear on new accounts, it seems the goal set by the Lab is by the end of the year.

That is not something that we’re going to be able to deliver real quickly. Don’t look for it in the next few weeks. But it is on the road map for this year, and we’ll try to make it better than the very end of the year, but there are a couple of things that have to get fixed on the back-end before that can work. So it's on the list, and we'll get someone on it as quickly as we can, but it's not something that's coming real soon now.

The plan is not just for new accounts that are created once the change is in effect, but to allow everyone to change their account names more or less when they desire. Like the old system, people can choose whatever first name they want, and chose one of a list of surnames. Once a name is created by someone, it cannot be used by anyone else, even if the account is deactivated. Even if a name is changed, you can still look up the person on Search as the old name is kept in the records.

As with the old system, the list of surnames will be routinely changed. Oz did say they will likely take suggestions from the residents, "It used to be something of a headache to put new names on the list." "Linden" (and possibly similar spellings such as "Lynden") will not be options .

Display names are not going away. Patch Linden did comment on the official blog that he wondered if the return of surnames might lead to their being less used, "it somewhat sunsets the need for them." Patch would also say on the forum thread, "Only standard English characters will be permitted." So the fancy letters in some display names cannot be used.

While people can theoretically change names as often as they want, there will be a fee involved to keep people from changing it too often. Oz stated, "we're just going to make it expensive enough that people won't think it's amusing enough to get lots of names." How high the fee will be has not yet been decided, "I don't know ... what expensive enough is."

It's probable that more details will be revealed at "Meet the Lindens" events at the upcoming Second Life Birthday. Stay tuned for more details.