Philip Rosedale Wants Help Getting His Avatar Back


Practically every resident who's been in Second Life for more than several years knows about Philip Rosedale, or rather Philip Linden as he used to be known inworld. Besides as the founder of Second Life, he was known for his unique look. His old prim hair was stiff and spikey, and he always had on a "Rocky Horror" t-shirt and a multicolored codpiece over his pants. 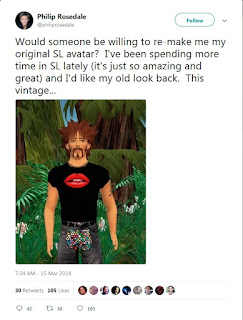 Philip stepped down as CEO of Linden Lab in 2008, though was interim CEO from June to October 2010, and stepped down from it's board of directors in 2013, leaving to concentrate more on his new virtual world High Fidelity. But apparently, one of his recent tweets suggests he's been having more interest in Second Life lately, appearing inworld in a regular account. And he would like some help getting his old look back.


Would someone be willing to re-make me my original SL avatar? I've been spending more time in SL lately (it's just so amazing and great) and I'd like my old look back. This vintage...

Philip got a large number of responses, some offering to help, others humoring such as one person who joked "I found your undies." It's also worth noting that Linden Lab had a contest for a new look for Philip while he was interim, the winning appearance announced in October 19, 2010. But he didn't have long to enjoy it as he stepped down the very next day.

Should Philip be sticking around for a while, it should be quite interesting, even if he's no longer a Linden.