Ebbe Linden Speaks at the VWBPE 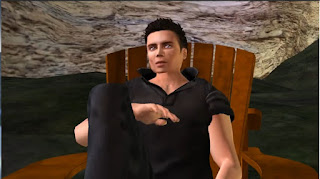 On Thursday March 15, Ebbe Linden (Ebbe Altberg) spoke at an event for the Virtual Worlds Best Practices in Education conference. This was the fourth year he had done so. Unlike the first two times, he did not speak live in front of an audience at the conference, but did so in a livestreamed interview in front of a small number of people. Also there answering some questions was Bret Linden (Bret Atwood).

Ebbe described the topic of education as "core to the idea of what Second Life is." Sansar was mainly focused on "revenue and user growth. And so education would be a tough area for us to spend money on ..." but still wanted educational areas to be part of their new virtual world. Ebbe brought up places such as the Apollo Museum and virtual replicas of an ancient Egyptian tomb. Of ease of use for the disabled, Ebbe conceeded that, "Sansar actually has a ways to go, and might actually be way more restricted with accessibility for some time to come, compared to Second Life."

Ebbe stated that Linden Lab was still putting money in Second Life, "we’re still really serious about our investment in Second Life, and the team is very motivated and dedicated to get growth .... So it’s not something that we’re just letting run its course or milking for revenues, or anything like that." He admitted that the price of virtual land was high, and would shift revenue from Second Life away from that and toward other fees, comparing them to "consumption taxes." He went on to say that this shift would benefit nonprofits as they would be paying less for land, of which they already get a 50% discount.

Of the topic of building in Sansar, Ebbe stated that unlike Second Life, Sansar builders would have to continue to rely on third-party platforms, "because we have to do so many things, we chose specifically chose not to focus on the creation of original content, if you will. There’s so many great third-party tools ..." Sansar also differs from Second Life in that if no one is visiting a region, after a few minutes it shuts down. If someone wants to visit it, it only takes a few seconds to turn it back on. He wondered if it might be possible to do something similar with Second Life someday.

Improvements in Second Life itself would include animesh and weather control. Ebbe also hinted there would also be better ways to combat griefers. Some questions were asked after the stream was done. Of the Teen Grid, Ebbe stated there were no plans to bring it back, though the issue could be up for discussion "later next year."

To watch the discussion, one can still see the recording on Youtube Gaming. There is also a transcript provided by Inara Pey.