Announcement: This Week At The Science Circle: "Copernicus’ Epicycles" 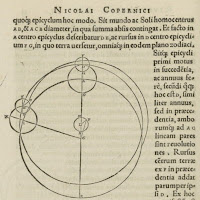 Nicolaus Copernicus (1473-1543) is sometimes called the father of modern astronomy. He’s famous for introducing to Western Europe a thorough and worked-out model of the Solar System with the Sun at the center. At the time, nearly everybody accepted Ptolemy‘s Earth-centered model, with planets riding on celestial spheres, and riding on epicycles inside those spheres. Many of us carry the idea that Copernicus simplified it all by moving the Sun to the center. It turns out, however, that Copernicus’ system is not appreciably simpler than Ptolemy’s — he, too, had epicycles in his model! Nor was Copernicus the first one to think about Sun-centered models of the Solar System, as that idea goes back at least to ancient Greece.
In this talk, I will outline the history of our understanding of the Sun-centered model of the Solar System, and give some detail about how Copernicus’ model worked, and why it took the work of others later for us to really accept that his basic idea was right.