Linden Lab Announces New Game in Second Life: "Tyrah and the Curse of the Magical Glytches"


In late June, and more recently in late August, Linden Lab was talking about a "grid-wide gaming experience" coming "soon." On Monday September 18, they announced it had arrived: "Tyrah and the Curse of the Magical Glytches."

The plot of the game is that Tyrah, the girl in danger in the Horizons game, has been rescued. But somehow Magellan Linden has apparently died. While Tyrah and the Moles are still talking about who will help protect the Grid, a new threat emerges: Ruth. Furious at being all but forgotten, she takes advantage of Magellan's departure to unleash magical creatures called "Glytches" on the Grid to wreck havoc. Not sure what to do, Magellan's robot sidekick Punkee decides on using the tactic of his former boss: get the residents to help out. 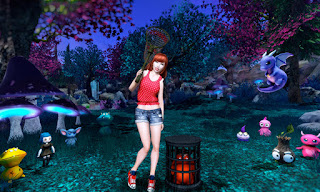 To play the game, head to Portal Park and head to the portal to the new area, called Hartyshire, and pick up the HUD and beginning weapon at the Gem Apothecary. The HUD will take you to the places you need to go to catch the Glytches. For those who got the SL14B avatar and it's egg this summer, there's a place at the Apothecary you can hatch it.

Read the announcement in full here. You can read more information about it here.