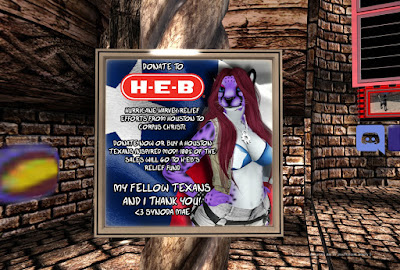 As the damage left by the massive flooding in Texas by Hurricane Harvey is revealed as the waters recede and homeowners return home often to find their place ruined, the scale of the damage is becoming more and more staggering, thought to be as high as 180 billion US dollars. Last Friday, the Newser reported on an item for sale on Marketplace with the money promised to go to the recovery efforts by H-E-B Groceries, a major chain of grocery stores in Texas.

SynodaMae Sonnenkern, who started the first fundraiser, has come up with another. She set up a fundraising kiosk at the Furry Fashion Lounge to raise more money for H-E-B's hurricane relief efforts, "Donate now or buy a Houston Texas inspired mod! 100% of the sales will go to H-E-B's relief fund. My fellow Texans and I thank you!" Her goal is to raise 40,000 Lindens.