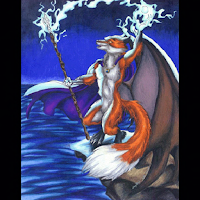 Sunnies;  Some of you may have known Jaxx Tardis, he was an early member of the group, but suffered from issues, that ended up cutting his life short.  He passed away, at a nursing home, yesterday morning.  Shockwave Yareach was closest to him and may have more info.  I knew him and will miss him.  He was a crazy fox.  At least he is at peace now.