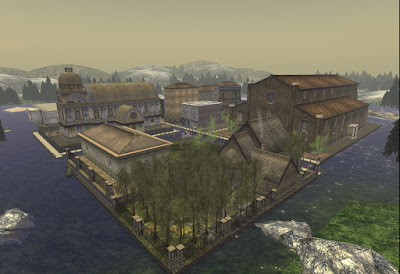 One well designed sim that's gotten attention for it's beauty, and for being the location of a group of a virtual actors and actresses that did an award-winning performance and machinima, will soon be gone. On her blog, Canary Beck announced Basilique, located in the Isolotto di Garda sim, will be closing on September 30.

I’ve decided that I will no longer keep up the Basilique (Isolotto di Garda) region in Second Life and will close it on September 30th, 2017. I’ve enjoyed maintaining the region and hope that you have enjoyed visiting it as well.

Canary did state in her blog that she was willing to have the sim transferred over to someone willing to pay the costs by Sept 23, but there was no mention of any such purchase after the date.

Wesley Regenbogen wrote about the place in November 2014. The sim, made in the image of a waterside Italian town, was created in January 2013 by Canary and Harvey Crabsticks. It's Basilique Performing Arts group staged plays there, the most noted was it's interpretation of "Paradise Lost" which won an award in the Avi Choice Awards.

The sim was the source of some controversy in which on the day of it's Linden inworld meetup in May 21 2015, I and a number of other nonhuman avatars were told our appearances were against the rules and only normal human looks were permitted, one telling me a friend had been ejected. Going there later, the locals I ran into neither had a problem with my appearance and seemed to be saying the rule wasn't really enforced. Looking around today, the rule had been relaxed to "Unless otherwise noted, we request that visitors to Basilique dress as humans in a minimum of casual dress."

In any event the closing of such a well-designed sim is a sad moment for the Grid. Those wanting to visit the place before it goes, head to http://maps.secondlife.com/secondlife/Isolotto%20di%20Garda/84/30/24 .