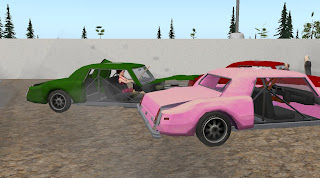 Last week on Thursday August 31, Bay City had their Demolition Derby Event. Bay City had only recently concluded it's "Hot Bay City Nights" car show a few days earlier. But none of the cars involved here had been in it. Instead, these were specially-designed cars made so outer parts such as doors and fenders would take damage when hit and eventually fall off, leaving the central frame and engine vulnerable to hits and eventual destruction when banged enough. The arena was set up in the North Channel sim. 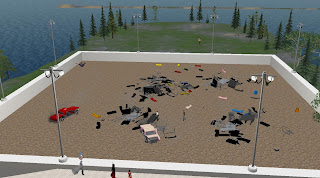 Eight people took part in each race. Besides Marianne McCann, among those taking part were Pygar Bu, GoSpeed Racer (no, she didn't use a Mark-Five), and Anthony (Adudenamed Anthony). Almostthere Inventor had made demolition derby arenas before for the Relay for Life and Creations for Parkinsons. But I never did ask who made the cars for this rumble of smashing virtual metal. Not everyone at the event took part. Many were content to watch the derby from the sidelines, including my alt Rezzdammit.

Frankie Lindman and Chrys (chrysanthemum.zuta) won the two races I was around to see, Chrys calling her victory "beginners luck ... I want a my own plate now." Indeed, she bumped her car into some wreckage a couple times after she was declared the winner of her race, and her vehicle came apart. People hung around for some joking around for a few minutes before going their separate ways. 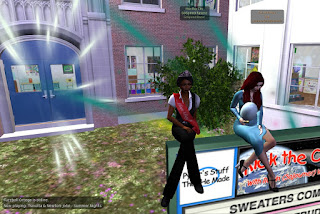 But a couple days later, many of them and others would meet up again at 8PM SL time on Saturday September 2. Every Saturday night this summer, Marianne had been setting off a fireworks show at the school in the Livingtree sim. And with Labor Day weekend being the end of summer, it was time for the last show.

GoSpeed Racer was playing the music for the event. But this time she was doing so with a tiara. She had been the winner of the Miss Bay City Beauty Pageant at the tail end of the car show days earlier. 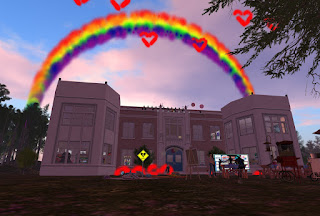 Eventually, it was time for the show to end, and the last of the fireworks formed a rainbow as "Man Or Astroma," the Mystery Science Theater 3000 ending theme music played as the night sky was turning to the pink clouds of dawn. "Thank again to GoSpeed Racer of KONA Stream for all the great tunes tonight," Marianne told everyone, "And Robin Sojourner for letting me blow up Livingtree all Summertime, each

Saturday at 8:00 p.m. SLT. And a special thank you to each of you for coming out for tonight's show. I hope you had fun!"

And so, the weekend fireworks shows at Bay City had come to an end, at least until summer comes again next year. But Bay City is an active place with things going on often, and will certainly be having some Halloween hijinks in October next month. Things don't stay too quiet for too long here.