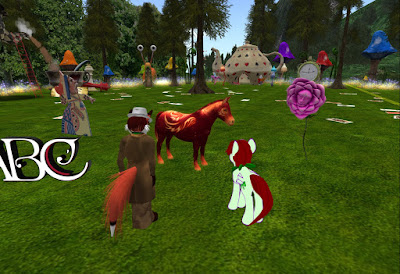 It was September 3, 2010 that Team Phoenix, later renamed Team Firestorm, was formed. They had come about as the result of the "Emeraldgate" controversy, which soon led to the removal of the Emerald Viewer. On Saturday September 9, Team Firestorm had their anniversary party. Besides two live music performers, there was also a gift available: a rideable pet mule, in Firestorm's colors. 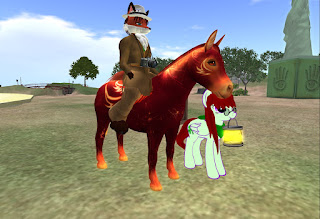 As with nearly every major event we hold we try to arrange a gift for all Second Life residents and this year will be no exception! ABC – AWESOME BREED CREATIONS have very generously created an exclusive collectible pet mule with an amazing one of a kind coat and eye! I like to think the Mule represents our strength and perhaps our stubbornness! WOW it’s gorgeous! Thank you so much ABC!

I headed to Firestorm Dow Forest (224/232/3902), and found the avatar giver in the size and shape of the mule. I clicked on it to get the package, went to the Ivory Tower to rezz it, and got a box. Opening it, I got the mule and was able to rezz it on the ground and ride it. I was able to name it, and my friend with me was able to click to get saddle and reins.The mule was listed at 143 days old, and was perfectly rideable. It didn't need food or water, but it was not breedable, 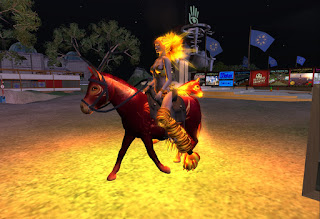 Unfortunately, Chilly the firekitty at the Newser office has no mule companion. By accident, I tried rezzing him in a spot where only the landowner could, and not only did the horse fail to rezz, it failed to appear in my inventory. When going back to the mule rezzer, it wouldn't give me another. So be careful where you take the mule from you inventory.

It is unclear how long the anniversary gift will be available. So go get a mule while you can.

Update: I later found the mule in my inventory after logging back on.