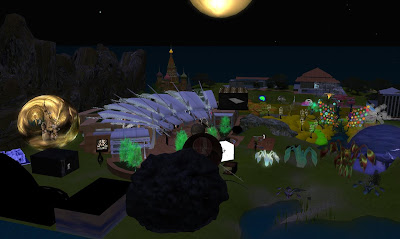 Last month, the manager of the University of Western Australia sims announced that four of their five sims would be retired following budget cuts at the real-life university that owns them. One, UWA Virlantis, would be handed to another owner. Three others, UWA, UWA Winthrop, and WASP Land, would be abandoned and allowed to vanish. Only the University of WA sim would remain after October 9.

Thankfully, the sims are still up. JayJay Zifanwe announced the sims have been given a reprieve, thanks in part to people writing to the university. None of the sims will be vanishing, although UWA Virlantis is still being handed to Dr Phylis Johnson (Sonicity Fitzroy).

Following a lot of work in the background at UWA in RL. The UWA presence in SL has been extended through 31st July 2017. Thank you to the many who have written in to UWA central providing support as well as the many who have worked to preserve a lot of the art and grounds in film. Thanks especially to the Desinging Worlds team with AviewTV and TreetTV for their incredible work on their tribute programme, and to Secret Rage (AKA Vee Marie) for her excellent videos documenting nearly everything on the 4 UWA sims. See links below. 4 of the 5 sims will remain part of the UWA cluster, and the 5th SIM (UWA Virtlantis) is being taken over by the University of San Jose & Sonicity Fitzroy, who have been occupying it for the last couple of years.

When sims are so often gone too soon, it's good news to hear about some given a new lease on life.
Posted by Bixyl Shuftan at 6:01 AM