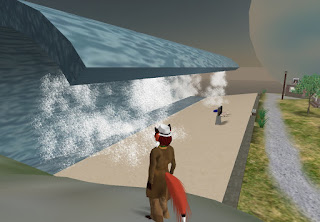 With Hurricane Mathew in the news, I thought about a sim that was aimed at teaching residents about the weather: NOAA Island, sometimes called Weather Island, at the Meteora sim. But taking a look, I found that the location was not on the map. A search revealed it wasn't just located, but nowhere on the map. Nor was it on the Destinations Guide.

NOAA Island has apparently vanished, probably some time ago. Checking the Youtube about it, the place was still around three years ago at least, though some exhibits were no longer working, possibly due to Linden Lab software updates. 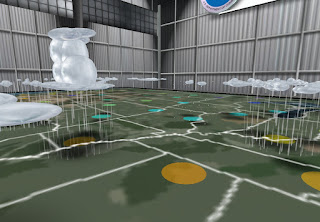 NOAA Island had been set up by the National Oceanic and Atmospheric Administration US government agency in 2007 during the heyday of Second Life as a way to help educate people about the weather. The place was part of the collection of sims known as the "Sci-Lands." Second Life Newspaper, and then Second Life Newser reported about the place in March 2008 and August 2011. At the later date, the sim had some neighbors such as NOAA Island 2 and Second Earth, a gigantic interactive globe. There was much to see in the sim, such as a tidal wave simulation, which had been the target of humor at least once, an interactive weather map, and a hurricane hunter airplane ride. 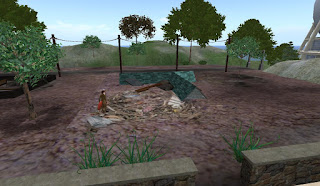 The sim was the scene of some activity in April 2012 in which people from the US Government were likely involved, along with the Raytheon corporation, with some project, but there is no information about any involvement since.

Most of us would agree the US Government would have better use for it's money than a sim (though could probably recall it being used for things much less useful), but it's still sad to see the place go.

(click here if the video fails to play)
Posted by Bixyl Shuftan at 1:00 PM