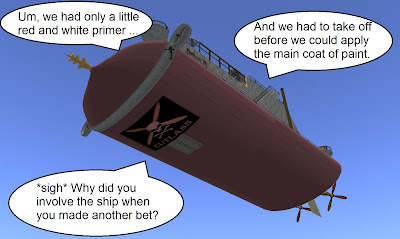 From the pirate party last night, someone (probably Shockwave Yarreach) painted the hull of the steampunk airship Club Cutlass into something resembling the submarine from "Operation Petticoat." Unlike the movie, however, there was no need to ask the girls for their undergarments and jettison them out the torpedo tubes.