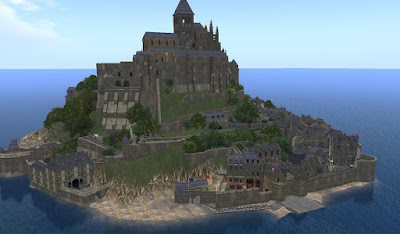 It seems for Mont Saint Michel, time has finally run out.

With the three UWA sims set for abandonment getting a new lease on virtual life, yours truly thought about another sim which a year ago faced the chopping block: Mont Saint Michel. Once listed by Becky Shamen as among her top ten places to visit in Second Life, the place was a virtual replica of a historic real-life location in northwestern France which over the centuries had served as an abbey, fortress, and prison before becoming a tourist spot. Over time a number of residents have visited this location, some posting their screenshots on a Flickr page for the place (most of the more recent pictures on the page have nothing to do with the island, though).

A little more than a year ago in September 2015, Moeka Kohime announced that for "economic" reasons the place would soon be closing. But when October arrived, the sim remained. As the weeks and months went by, the sim remained up. I would continue to drop by every month or two, the last time in August.

Why didn't Linden Lab just up and let the place fade away? At the time Linden Lab was still smarting over the closing of the SS Galaxy. So maybe the location was left up to ease the worries of residents. While it would have made sense for Linden Lab to acquire the location like it eventually did the SS Galaxy, it never did.

And so, once again Second Life says goodbye to a noted, well-designed location. In this case, residents had a little more time to say their farewells.