One brand of furry avatar that was popular in the past was AnthroXtacy, often called "AX" for short. Designed and made by a team led by Tinintri Mistral, the line of avatars gained a large following, and AX had a two-sim area with their own shopping mall and a club, where DJs such as Grease Coakes performed. But in October 2013, the team shut down and the store and club closed, much to the sadness of fans. In their final days, the store had a couple packages with numerous avatars that one could pick up for free. 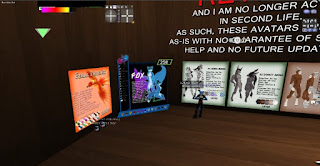 As it turned out, the two packages would be placed in one more location. High above the Northstar Polaris sim was a skybox where there were several AX avatar vendors that offered "fatpacks" or several colors of an avatar, for the old price of a single one. But there were also the two packages of free avatars. Among them were the AnthroXtacy Fox and the Shark.

Sadly, this location is no longer available. When yours truly tried going to the skybox yesterday, I found myself at a certain location in the ground. No matter where I would try teleporting to the sim at, I would always end up at the spot. Flying to the location, the skybox was gone. 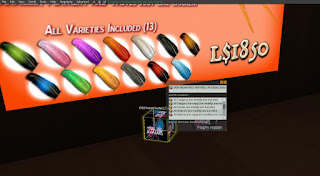 As a precaution, I checked the mall at the Northstar sim, or rather what was left of it. In the past, the Northstar Mall was a huge two-story store that had a number of avatars and accessories, that stretched across two sims. But in more recent times, less than a third of the store remains, the part in the Northstar sim. The packages were not in their either.

While it's possible there may be another place where the AX free avatar packages are, if so the Newser does not know about it. As for AX Avatars, some remain for sale on Second Life Marketplace. This appears to be all that's left of the AnthroXtacy line.