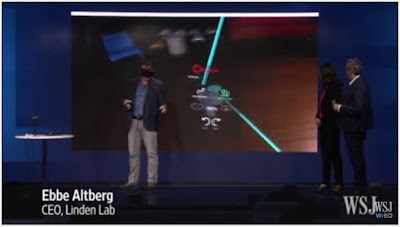 At the Wall Street Journal's WSJD Live 2016 global teleconference on technology, Linden Lab CEO Ebbe Altberg (known inworld as Ebbe Linden), demonstrated it's upcoming virtual world Sansar. In a video segment about a minute and a half long, Altberg donned a VR helmet and controllers and with a wide screen showing a living room somewhere in Sansar, he moved things around in front of WSJ reporters Jeoffrey Prowler and Joanna Stern. He did explain the content was made by other users, this particular content bought by the Lab from one particular user, going on to say Second Life had a "half a billion dollar GDP." Of Sansar, he stated that they had invited "a few hundred users" to take part in their "creative preview," with plans to keep adding more, with the full opening sometime in the first quarter of 2017. 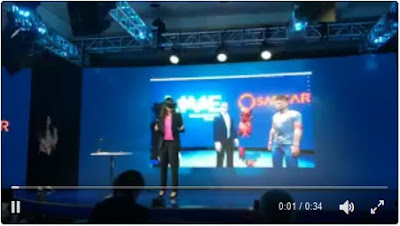 There was also a tweeted video by Benjamin Rohe, who was among those there, showing about a half minute of footage of Sansar avatars.

Both Inara Pey and Hamlet Au, who also wrote about the video with Ebbe Altberg (Inara about the video with the avatars), felt not much new was revealed by the videos, but they did raise some questions, such as when donning the VR helmet can the view be adjusted to see one's own avatar, and considering "less than a million people" own a VR headset why was Ebbe Linden using one to demonstrate Sansar? Inara felt the next set of Lab Chat would be "interesting."