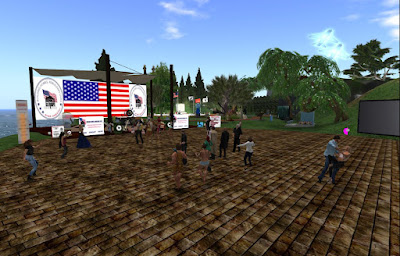 On Sunday August 29, Veterans Isle had it's monthly fundraiser concert. The event, organized in part by Frets Nirvana, was held from 4PM SL time to around 9PM SL time.

Tonight is the last of our summer series of benefits for Homes For Our Troops.  And with the recent developments and losses, it could not be more appropriate.  Come on out and support those who make huge sacrifices for our freedom. We have a great lineup of music for tonight. First up is Erin and Satin at 5 PM.

Several live musicians and one DJ played music for the crowd. DJ Waya started things up at 4PM. At 5PM, it was Erin and Satin's turn on stage. At 6PM was the popular Keeba Tamas and her Tiny Maniacs band. 7PM brought Hogan Baily. And last but not least was Austin Moores at 8 PM. As they played music to the crowd, the people would donate cash to two house-shaped kiosks on either side of the stage.

Austin would say at one point, "Many of our troops are coming back, but they don't come back whole. They come back with peices missing, or their mind isn't whole." He mentioned that his brother came back from Vietnam, "but Nam never left him," and he drank himself to death.

The purpose of Homes for Our Troops is to raise money to help keep roofs over the heads of wounded veterans. To learn more, visit https://www.hfotusa.org.