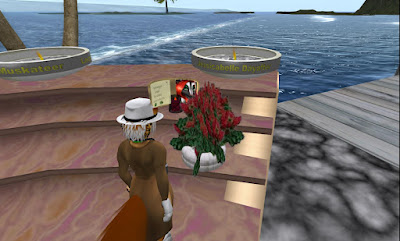 The reaction to the news of Jessicabelle Dayafter's passing among the Sunweavers has been sadness, often preceded by shock. She was popular with many, and people couldn't believe she was gone. In Sunweaver Eclipse, Shockwave Yareach had a Memorial Garden for Sunweavers and friends of the community whom had passed away, such as Akea Grommet and Lacy Musketeer. And now, Jessicabelle's name has been added to it, with a flame in her honor.

Stopping by, flowers had been dropped off, as well as a card with her picture: "Always and Forever Jessicabelle." The lively skunkette of the Sunweavers will never be forgotten.