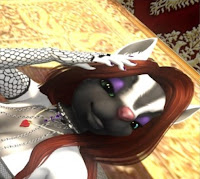 The Sunweaver/Angels community has lost a longtime member. It was announced last night that Jessicabelle Dayafter had passed away.

Some sad news. We received word that our loveable skunkette, Jessicabelle Dayafter, has passed away. The news came from an SL resident whom told us she knew her in RL. Jessica did post on Discord about a month ago she had come down with Covid.

Jessicabelle had been active in Second Life since 2007, and has been with a number of communities and groups. This includes the Sunweavers, Nydia's Angels, and the New Bastogne WW2 RP. She was noted for her anthro skunk avatar, and liked posing for pictures in outfits, such as seasonal ones for Christmas and Halloween, and appeared in many of Nydia Tungsten's calendars. She would also appear in a number of Nydia Tungsten's music videos. She also had skill as a builder, and would design and build some combat capable WW2-era aircraft for Second Life.

Of her real-life family, it is known she had a sibling who died years ago, and her mother passed on a number of months ago.

Posted by Bixyl Shuftan at 7:35 AM