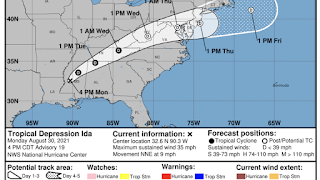 When Hurricane Ida hit Louisiana on Sunday August 27, it caused a huge amount of damage with over a million losing power in the state and next door Mississippi. But the storm wasn't done yet. It's still powerful remnants moved inland, eventually reaching the northeast US, where it caused major flooding in several states, notably New York City where some were trapped in their basements and drowned. There was video footage of one of the city's subway's choked with floodwaters. The storm has been blamed for 46 deaths, and counting.

Back in Louisiana, power is still out for over 800,000 people, with nine people confirmed dead. Numerous gas stations are described as having long lines of people waiting to get fuel, and some grocery stores are reportedly rationing certain foods and ice as people anticipating gasoline shortages are stocking up to reduce trips by car.

Due to it's level of destruction, "Ida" will be retired as a name for Hurricanes.