For those of you looking for pictures that cover every angle from one's position, there's a new viewer by Linden Lab: Project 360 Capture. Made available on Friday September 3, it was mentioned in the Second Life Tools and Technology blog on Tuesday September 7.

You can now take a 360-degree snapshot of a location in Second Life. Better than a simple panoramic image, the 360 snapshot covers 360 degrees in all three dimensions, allowing you to see everything both above and below your avatar as well, as though the image is projected on the inside of a sphere. 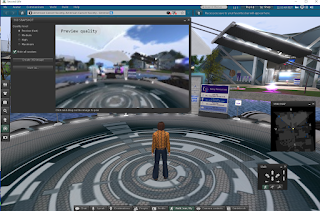 To get the viewer, download it here. As it's a Linden viewer, some used to Firestorm may have a little difficulty. To check out the special feature, click on "World" at the top and select "360 snapshot" underneath regular snapshots (one can also press Ctrl+Alt+Shift+S). Upon selecting this option, you get a preview image. You have options to increase the quality of the image, and to hide any avatars within view (notably your own), then press "Create 360 image." One can click and hold on the image with the cursor, and move it around. Pressing "Save as" will create a panoramic image. 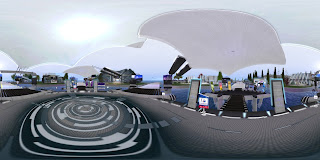 Loaded on some social media pages and websites, people may be able to interact with the image by clicking, holding, and moving around. This includes Flickr, which Alexa Linden loaded some images on.

The blog page did mention a few known issues, such as items missing from the snapshot (reccomended that one pan around and give things time to rezz), older and less powerful graphics cards may cause corrupted issues, low graphics settings in Preferences may result in a less satisfactory picture than desires. and higher detailed pictures may take a while for the viewer to make.

To check out the Linden blog page, Click Here.