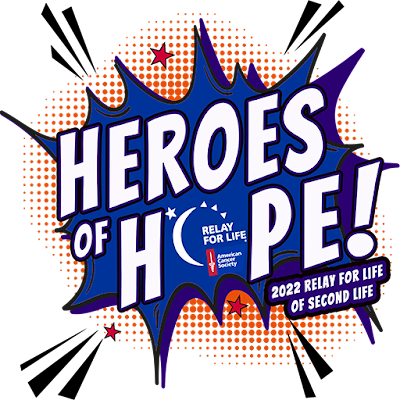 On Friday September 3, Stingray Rainmaker announced that the logo for the 2022 Relay for Life fundraising season had been selected. The design selected was by Arizona Ballinger. The news was announced on the Second Life ACS website.

The 2022 Relay For Life of Second Life theme is: Heroes of Hope! - which will undoubtedly manifest itself through tales of heroes, both fiction and non-fiction. The theme will align perfectly as we pursue our goal of raising $500,000 USD in a single year...and as we close in on $5 Million USD, all-time.

We would like to thank everyone who submitted logo concepts over the last several weeks and we’re excited to unveil the final version of the 2022 Relay For Life of Second Life Theme Logo, designed by Arizona Ballinger.

This logo will serve as our flagship symbol for our Relay For Life efforts in 2022. We’re going to try something new this year by integrating the RFL logo into the theme logo (notice “O’ in Hope). Because we cannot sell anything with the ACS/RFL logo on it, we will also make an alternative version of the logo available to anyone who wishes to sell items for donations with the theme logo on them. You can get a copy of both logos in the “logo section” of the Relay Building on the American Cancer Society Island in Second Life.

Already, the logo is being used. In Steelhead Bay, Fuzzball Ortega, the captain of the Steelhead Salmons team, put it on display.