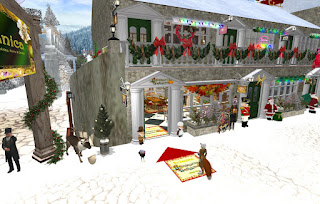 Caught between Halloween and Christmas, Thanksgiving sometimes gets the short end of the stick when it comes to attention. But in Blue Moon, there's a "mini hunt" in the theme of the holiday going on. So I dropped by to take a look.

It’s the one day in the year when Americans who can’t agree on anything will sit down together and agree on what to have for dinner. Enjoy a holiday feast and learn about the Thanksgiving traditions that bring together family and friends in the spirit of gratitude at Botanica’s Café Americana. This is an educational mini hunt with 7 Thanksgiving-themed prizes to earn a Thanksgiving feast for your table. The event runs from November 12th to 26th. 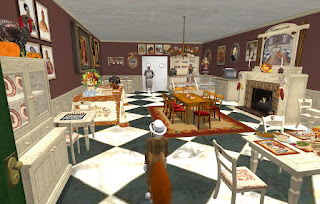 Blue Moon had a wintery look, and the SURL I found took me to a building in a town area with Christmas and Thanksgiving decor, with a few turkeys around, including one walking around. One lady 'bot going about offered me a little cocoa. Stepping inside, the place resembled a small bakery and diner. There were a few tables up front, the nearest to the door I could sit in and get dinner. A smaller one looked like another a couple people could play a game of chess. In the back was a counter full of pies and other baked goods. There were also numerous pictures on the walls, such as American Indians and the classic Norman Rockwell Thanksgiving dinner picture. Going in, I was handed a notecard, "Welcome Botanica's Thanksgiving Mini Hunt. Begin by finding the painting of the First Thanksgiving, click it,  and then follow the clues." Clicking on the picture, I got a copy, and a Internet link to some information about the first Thanksgiving dinner. There were some dishes that aren't usually part of what's served today. I also got a clue on what to click on next. I had eight things to click on, and the clues were easy enough for me to figure out. So I ended up with eight decorative gifts.

As stated, the hunt goes on to the day after Thanksgiving, November 26.