Noted Second Life media personality Draxtor Despres is noted for many shows. Nowdays, he's known for hosting the Second Life Book Club, and the Second Life Destinations videos he does for Linden Lab. But there was one show he'd still been doing after over seven years and over 300 episodes: The Drax Files Radio Hour. But a few days ago on October 24, he aired a brief five minute episode announcing "This Is The End." 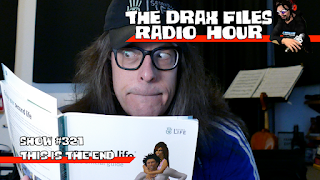 "I'd sad, but also relieved," he stated in the final show, saying his listenership for this particular show had dwindled to a tiny few, "It makes no sense to continue this podcast with this lack of interest. ... That's totally fine. ... It's a very saturated marketplace. And truth be told, I am extremely busy on other fronts that are very gratifying. People know that I come from radio. I love radio. I love the podcast medium. I love audio. But I also love making videos and profiling Second Life people. And I love making documentaries. ... We are very busy with an upcoming documentary about virtual cultures in Pandemic times ... I produce a minimum of about 140 videos per year for the official Second Life social. ... we're extremely productive. The podcast is just not catching on. I'm sorry, but there is enough media, enough stories, enough art, and reportage documentaries from yours truly. I think I'm overexposed as it is."

My friends: I decided to end this podcast. we started way back in 2014, shortly before Ebbe Altberg came in. We had over 2000 listeners per week. We are down to 9!

I don’t mind. I am happy that i can cancel myself in fact because we churn out over 150 videos with second life stories per year, not counting the feature length work.

That should be enough should it not? listen to my short announcement and tell me what you think. Thank you for making my second life awesome every day!

The Drax Files Radio Hour first aired on Friday January 10, 2014. At first he did the show with Jo Yardley, best known for her "1920s Berlin Project." The first few episodes would go into topics like supposed NSA investigations of Second Life, other platforms such as High Fidelity and Cloud Party, and the resignation of then CEO of Linden Lab Rod Humble. More recent episodes were about subjects of Second Life Book Club airings. The second to last episode, Show 320, aired on August 16. So the Radio Hour had been on hold for a while.

For those wanting to keep in touch with Draxtor, "Befriend me inworld, join the book club, ... follow me on Twitter." One can also email him at draxtor@draxtor.com, or madeinsl@draxtor.com if there's a story about Second Life to tell