It was almost a year ago when the Newser first reported on the Firecracker Arcade, a place at Montecito Bay in which one could play dozens of video games like at the arcades of the 1980s and 90s. But recently, the neon pink has closed and the games moved out. They've been moved to another, somewhat larger arcade in another location in the north end of the sim. 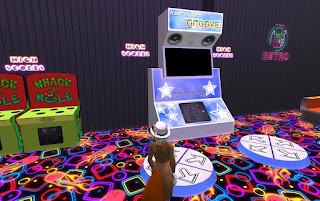 The new Firecracker arcade looks a little like a converted warehouse building, with the word "Arcade" in big letters on the side. The ground floor has the "carnival" games, with the largest one "Slime Squish" located outside along with a bull-riding game and some other novelties. Walking inside, straight ahead is the bowling game in the middle, with some other games at the walls such as Wack-A-Mole, and the dancing game Freestylers Groove.

The second floor is where the video arcade games are, and there are many dozens. Some are actual arcade games such as Pac Man and Altered Beast. Others are home video games that in real life never were in coin-operated machines, such as Sonic and Mega Man. A few such as Sailor Moon R I'd never heard of a video game adaptation of. One, Sim-City, seems an odd fit as it's a strategy game and not an action one. But one can make a quick town with it (not sure how one can save their progress here). 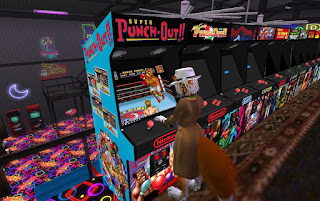 It's recommended that you appear outside the club rather than making a landmark inside as the information from the machines can take some time to load, especially if you have a slower computer and appear next to a number of arcade games. But the place is well worth going to, especially for those with fond memories of video arcades. So be sure to come by and get your game on.