Bomb Diffused At The Newser Office 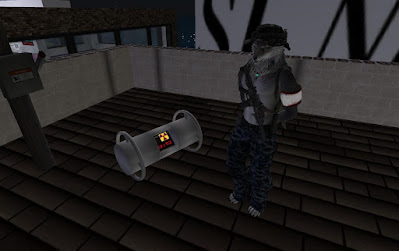 While reporting the news has always had it's share of critics, seldom do things with telling Second Life news stories result in violence. So it was a surprise when Rebel Wolf (HermitBlue Resident) of the Deathlands informed yours truly that a bomb had been placed at the Newser office in HV Community.

The bomb itself was a metal canister that was small enough to be carried by one strong man, and had a nuclear symbol and a countdown clock. While we could simply toss it into the water into the next sim, we didn't want to cause radioactive pollution. So the decision was made to try and disarm it.

So the cover of the circuitry was opened, and we carefully looked things over. Then we went ahead and cut a wire. The result was an alarm going off, and we barely had enough time to duck before there was an explosion of - confetti? It was a prank.

Rebel Wolf didn't say how he found out about the bomb, so it may have been an anonymous tip. So far, there have been no leads on who left the device. Stay tuned for further details.

The preceding was a fictional account for the purpose of entertainment.