Fans of April Linden, the self-described "Gridbun" of Linden Lab, are getting some sad news. On Friday November 5, she announced she was leaving. 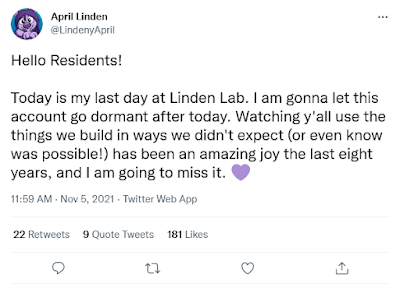 Today is my last day at Linden Lab. I am gonna let this account go dormant after today. Watching y'all use the things we build in ways we didn't expect (or even know was possible!) has been an amazing joy the last eight years, and I am going to miss it. (heart)

My personal Twitter account is @bunnyhalberd , but I'm not a very exciting person to follow. I live in a small town in rural Washington and mostly just post about the silly things I build in my workshop because I figured they needed to exist.

Thank you for making the last eight years be a wonderful experience! I am very muchly going to miss being on the inside of this wonderful and crazy world that we all build together. (heart) 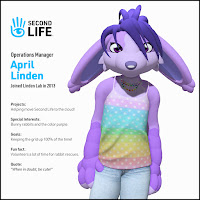 April's announcement got dozens of replies, including some from noted residents. Prokofy Neva, "Dear April, you left the virtual world a better place than you found it with your devoted work on the cloud migration and all that followed. Good luck on your future projects!" Daniel Voyager, "Thanks for all of your hard work to make Second Life a better place and keeping everyone updated when the grid had downtimes. Good luck for the future." Inara Pey, "Nooooo!! Say it's not true! We need Lindeny Gridbun! Seriously, am saddened to hear you are leaving LL, but wishing you all the very best for the future. Shall add your other account to my Following list!" Will Burns, "You will be missed... teh cute shall go on!" Luca, "April noo! =c will miss April, but best of luck with whatever April's going to do next x3" Caitlin Tobias, "Dear April, I wish you all the best and hope you’ll have fun on your new adventures!" Pantera Polnocy, "Thank you for being the awesome gridbun for all this time. ~" 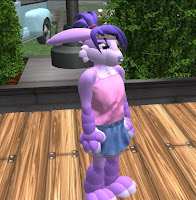 April Linden joined the Lab in 2013, and became instantly known by her purple Luskwood bunny avatar. She would appear at numerous Bay City events, and others such as the Happy Vixen's Luskwood Tribute Party and just walking down the road at Second Life Birthday events. She eventually rose to the position of operations manager, and would take it upon herself to apologize to the residents when something went very wrong. With the move to "the Cloud," she would occasionally update the residents on the Lab's progress, and about a year ago announced all data from the sims had been transfered over.

In July 2019, April was interviewed along with Oz Linden. April revealed she had originally a regular resident who signed up in 2006, whom still came on using the accound and had a couple regions. She considered Second Life important as she came from a family where certain issues "were not to be discussed," and one could listen and talk about them here. Of maintaining the Grid, she called it a complex job with one "generation" of Lindens building on top of one another year after year, and sometimes the only way to fix things was to take the Grid offline, which she disliked, partially because it kept happening to her so much in her days as a regular resident.

On a more personal note, April Linden was spoken of fondly by some friends and neighbors of mine. She will be missed.