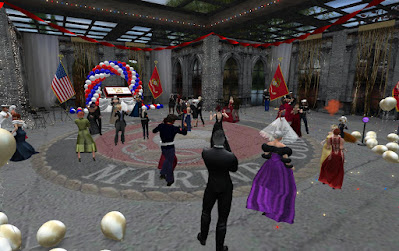 Wednesday November 10 was the anniversary of the founding of the US Marines, 246 years since the founding of the Continental Marines in 1775 (July 11, 1798 was when they were re-founded under the Federal Government). To celebrate, the Veterans Tribute held a party in their honor, with a number of residents whom were Marine veterans present.

The 15th Annual Second Life Veteran's Tribute requests your presence in joining us as we celebrate 246 years of the UNITED STATES MARINE CORPS with a formal ball.  The ball is open to both military and civilians.

DJ Huntyr played the music from 5 to 7 PM.From 7 to 10 PM, the music was DJed by Flattop Ewing.  A benediction was done by Samson Rowley.

There was a cake in the corner. There was also a present giver that when clicked would offer a package. When unpacked, the person would get a Marine-themed bracelet.

This is far from the last of the Veterans Tribute events. Today, there are eight hours of events planned there from 2 to 10 PM.