For fans of the Film Threat theater, which appeared in July to review "Attack of the Doc," it's back with a review of a B movie from a small producer, "Corona Zombies." 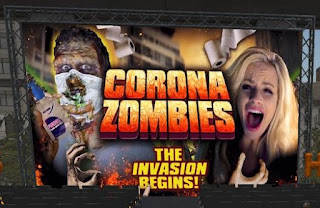 “We’re amazed at how Linden Lab was able to bring the spirit of Film Threat to life in this virtual space and thrilled that we’ll be able to conduct screenings and other special events in a whole new way,” says Chris Gore, founder of Film Threat. “It’s our hope to grow this venue and events to engage with Film Threat and indie film fans around the world.” Film Threat is the leading independent film news and review site, offering the scoop on the latest releases as well as curated picks from past decades.

Inspired by theaters and film festivals from the physical world, this two-story virtual cinema venue offers a unique and immersive way to experience movies. The space was first revealed back in July for Kickstarter backers of Gore’s upcoming Attack of the Doc documentary as part of an exclusive sneak peek. This region offers food trucks, sleek cafes, and modern lounges to house insightful discussions amongst Residents. Additionally, Film Threat-branded exclusive collectible merchandise can be found at booths throughout the venue.

On October 28, about a week after the announcement in the Linden blog, a video review of a movie went up at the theater: "Corona Zombies." Planning for the film had started before the Pandemic started. When it hit, the producers decided to have fun with it, and had the virus zombyfy the infected. And like other zombies, they would try to eat the living. In response a "Corona Squad" was created to deal with them. The review showed the film going about like a cheesy 1970s monster flick, with low budget special effects, bad and unnecessarily dubbed dialouge, characters making dumb decisions that get them killed, etc. But the producers and actors had fun doing it. 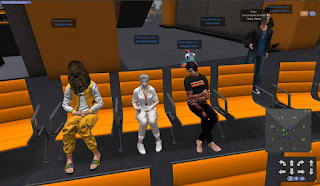 Dropping in at the opening, which lasted from 11AM to 2PM SL time, there were a number of Lindens in the crowd. Cris Gore was also there in his avatar with the same name.

The next review, for the movie "Insert Coin," is scheduled to appear about a week from now on Thursday November 11, "The oral history of a team of geeks and misfits in the back of a Chicago factory creating the biggest video games (Mortal Kombat, NBA JAM, and others) of all time." On December 16

Addition: Checking again, the theater wasn't playing the film review at the time. It may be playing only at certain times, or perhaps has stopped until the next one.