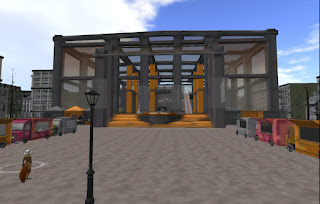 Yesterday, Thursday July 29, there was an "exclusive invitation" by Linden Lab to the residents.  This was for an event that was a cooperation between Linden Lab and the director of a TV show documentary.

You are invited to an exclusive event on July 29 at 3PM-7PM (Pacific Time).

The entire presentation is 30 minutes, but hang out after to chat in Second Life! Attendees will see the teaser trailer debut, poster reveal and get a first look at the documentary "Attack of the Doc!" with host Chris Gore. Spots are limited, so don’t miss out! 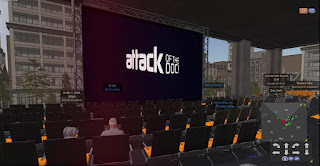 Film Threat is a four sim area showing a large theater building in the middle. In front are a number of food trucks and a few stalls where one can pick up a "swag bag" that contains t-shirts of the event. What's currently playing is a teaser to a documentary of "Attack of the Show," a live television show that "reviewed new technology, aired parodies, discussed pop culture and general news, and gave previews of video games, movies, and digital media." It aired from 2005 to 2013. One of the people behind it, Chris Gore, was producing the documentary that was named "Attack of the Doc." It is planned to air in 2022. 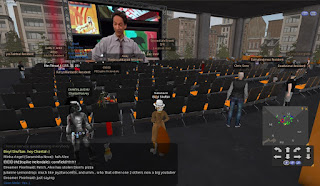 I found out about the event in a group chat. Heading over, there were a number of people there, including Brett Linden in the seats, and at one point Patch Linden walked in. Also there was Chantal Harvey, a machinima producer from Second Life's golden age over a decade ago. And Chris Gore was there himself, in an avatar with his real-life name.

Talking to Chris Gore (and getting the okay to use the conversation, he was enjoying his time in Second Life,  "This is cool!" He went on to say, "We do plan to do other events in here. ... We're planning monthly events starting in September. No date set, but pay attention on social media to find out."

While the event was listed in the official blog, it was under "Highlights of the Second Life Destination Guide." So those checking out the blog would notice it while those who just peeked at secondlife.com wouldn't know about it without clicking further.

The Film Threat theater is at Film Threat A/(133/6/23). It's unknown how long the teaser will keep playing.

Posted by Bixyl Shuftan at 2:50 PM