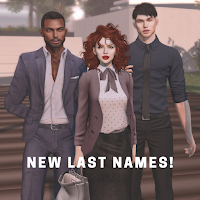 Yesterday, Monday July 12, Linden Lab announced in the official Second Life blog that they had added several new last names to the list of surnames available for residents to change their account names to.

Today some of the older last name options were removed and the following new ones were added:

Several older choices for surnames were discarded, keeping the list of available last names at forty-eight.

The Lab stated the new list of last names will be available until about mid-October, in three months time. Then, some will be added, and some taken away. The Lab also plans for some Halloween-themed limited-edition last names to be available only around for a short time.