Free Lindens At The Fallout Shelter 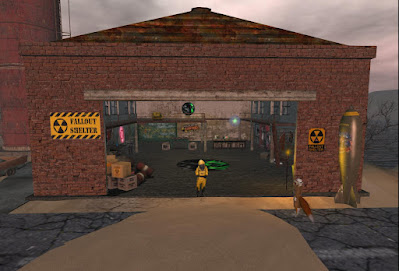 For those dropping by the Fallout Shelter on Sundays, something new has been added. This weekend, Rebel Wolf announced a raffle that would give a prize to a random winner, if they were part of the sim group or not.

The Insane Wolf is trying something new..He has a raffle gas pump in the Fallout Factory ( dance hall) In theory anyone can click on to enter, and win $200 on Sunday night. Non group members can even enter right now. The prize may increase if there is any interest. But I'm very cheap. Sue Me. Come one come all. Bring your alts! It should work..maybe...hopefully...

Rebel Wolf would tell me, "If there is any interest by the draw Sunday night at or after dance, I may increase the prize to 1000 a  week, group members only, but for now its open to all. ... Don't gotta be here to win. ... If it gets a lotof interest, it stays, and robs me blind with a increase in Lindens to give away. So! Donate to the Deadlands donation barrell, so I can give it away."

The Fallut Shelter is in th Deadlands,in Paradise Kingdom (87/37/22) (follow the road).