Over 11,000 Lindens In Prizes Given Out at Happy Vixen's Fourth of July Party 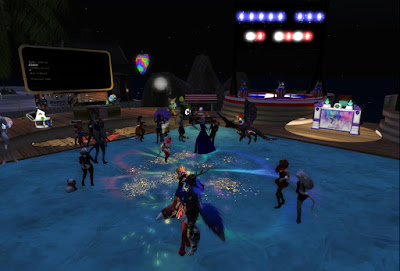 Over the weekend, there were a number of Fourth of July parties from Rosehaven to Virtual Ability. But one, The Happy Vixen, was particularly generous with it's prizes. The beach club held a double event over four hours with two DJs, and 11,600 Lindens given out as cash prizes.

Hey folks! It's Independence Day in the USA, and it's time for our Fourth of July party. Come dressed in red white and blue, have a red white and blue avie, have or come as an eagle, or just wave an American flag. DJ Jazzy will be playing her "Thunder on the Beach" set with 2500 Lindens in a fishbowl contest (all can join, including staff). Be sure to set your viewer to Midnight to see the fireworks.

DJ Jazzy (Jasmine Dawn/Jasmine Knickers) played the tunes for the first two hours. She also decorated the place with a few red white and blue banners, a food stall with some sweets with red white and blue frosting, and a fireworks display that would go off at times. She would provide the initial 2500L for the first of the two contest that night, and the 2600 of the second. Club owner Nydia Tungsten would bump it up to 9000 Linden dollars. The second half of the event was DJed by DJ Maliit.

More than two dozen people would show up at the double event, some showing up after some real-life Fourth events. Instead of votes on the board, the three winners of each of the two contest were determined by the "fishbowl." Unlike normal events, this was open to the DJs and hosteses and other staff. The 9000 Linden prize of the first half was split between Kryxia Silverfall, Valkyrie McGill, and MaliitCoyote Resident. The 2600L prize for the second half was shared by Mandy Lehew (Wedge Venkman), LiskaBystrouska Resident, and BurnerBob Resident.

The Happy Vixen is the most active of the Sunweaver community clubs, with events several days each week, is a member of the FCA, and recently celebrated it's tenth anniversary. It is located at Purrfection Estates (236/219/24).