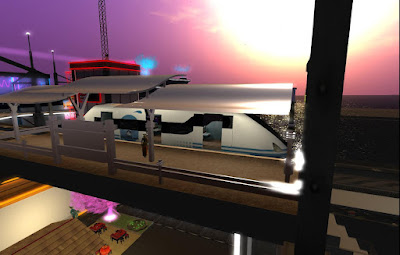 The Montecito Bay sim has seen a number of changes in recent months, notably the addition of three neighbors: Monstra Aquavia, Crux Dark Citadel, and Novae Dilucula. For the Bay itself, one notable change is the addition of a mass transit monorail system in the city.

There are a few stations in town where one can wait for the rail car. Once the doors open, just walk in and have a seat. If it closes before you get on, you can still click on it and select sit, but you won't be able to choose which seat. Then just enjoy the ride. The track has some twist and turns, going slightly up and down at a few points. There's also a short tunnel the car goes through. The track takes you past some noteworthy sights, including the video arcade, a pool of green slime, and the Azucar Tower, the name that started appearing over a year ago on the sim before it changed.

Once the car approaches the station you want to get off at, don't hop off too early as you'll end up falling through the floor. Wait until it comes to a complete stop. Once that happens, the doors open and you're ready to exit.