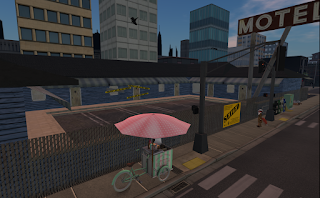 One of Montecito Bay's less glamorous but more eye-catching locations will soon be history. The city motel has been bought up and closed by a mysterious new owner. In front is a fence with a sign, saying the property had been seized, "Any person who attempts to tamper with this property will be prosecuted."

"Some weird entity is claiming parcels via eminent domain," Moff (MoffettMephit Resident) told me, "Nobody has ever heard of them!" I asked who they were, and he answered, "Azucar, Incorporated, apparently." He had tried looking up information online about them, and found nothing, "They must be brand new or something." 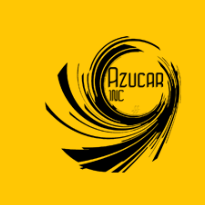 Stopping by the party at Studio 86 that night, which is just down the street south of the motel, people had various ideas what was going on. "Oh man, the hotel! I heard they found one of those mutants in there and the army came and closed the hotel down." "Mutants? Is that what's been messing around Montecito Bay?" "Yes, government projects. Maybe aliens. Or that SCP stuff the kids talk about on Redit." "I seen it with my own eyes, it looked like an alien, but much much bigger and stronger." "I was thinking of the church of the bleeding jackal skull. I have been watching too many 'You Don't Know Jack' commercials." "Azucar is Spanish for sugar! So maybe we're getting a Latin candy company!" "Afterwards the alien asked for sugar, in water." 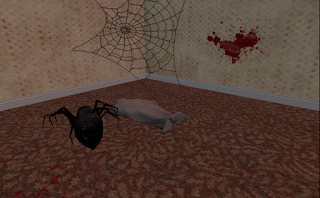 In the northwestern part of town, the vicinity of the hotel hasn't seen the destruction of other parts of Montecito Bay such as last year's Groundhog Day incident, and the flying saucer crash weeks earlier. But there were a few "crop circles" in the vicinity. Before that, there was a weird statue not far away that some passersby described as compelling them to approach it. As for the motel itself, it's better days were years ago. While it's a cheap place to stay if one has almost no money, that one of the rooms is blocked off with "crime scene" tape is a frequent sight. There are rumors the place has freakishly huge spiders, but no doubt those tales are from combinations of liquor and  arachnophobia.

Note: This is a fun article done at the request of Montecito Bay