Gamer Gets Help For Friend Having Seizure 5000 Miles Away 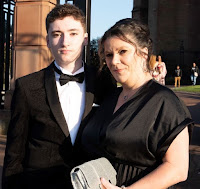 To those who say online friends aren't real friends, the parents of a 17 year old gamer, Adian Jackson, would disagree. They were watching TV in their home in Widnes, Great Britian, while their son was playing games on his computer upstairs. They had no idea anything was amiss until two police cars with lights flashing drove over. The three officers told them they'd gotten a call that something was wrong with the boy. Going upstairs, the boy was found "severely disoriented and not fully conscious of his surroundings." He still had his headset on, and a gamer friend, the one whom had made the call, was still online trying to talk to him.

The other gamer was Dia Lathora of Texas, 5000 miles away. While they were both gaming online, he suddenly stopped talking Dia was able to guess he was having a seizure. She had his address, but not his phone number, so she tried to reach an emergency number. While she couldn't find it, she was able to talk to someone, and though that person was able to explain what was happening.

"We always say to the kids, be careful who you speak to online," Caroline Jackson stated, "but in this case, it was invaluable."