"Bunny is Back" Rita Mariner Back Online 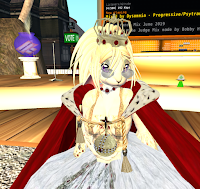 Good news for the Sunweaver community. After a few days of being locked out of Second Life with her main account, Rita Mariner announced yesterday she was able to get back on once more, "I was able to log in as of 2:30 CST (12:30 SLT)."

Rita's banning has raised more than a few eyebrows, at least one estate owner asking if something like this could happen to her as well, having her account frozen because she was sent a form that got lost in the mail or email. It was also brought up that the original Steelhead community closed down partially because the Lab had locked out the estate owner's main account (the bigger reason was numerous real-life difficulties). One person commented, "That's disturbing, and rather draconian. Something like this only reinforces the fact that FinCEN completely controls the Linden Dollar. What the hell happened to Linden Lab's spine?" Another responded, "US government regulations is what happened and LL is not going to go against it."

In any event the bunny is back, and life in the Sunweaver/Angel community can get back to clubbing and preparing for the Relay. Some though are glancing over their shoulders.