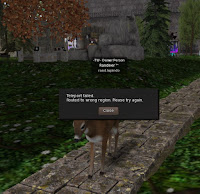 In Second Life's early years, it was common for the entire Grid to be taken offline and the residents having to leave for a while so the Lindens could fix glitches. These days, things are much better with most residents having to face rolling restarts about once a week. But earlier this week, things began to go wrong. Starting on early Tuesday morning, people in some places found themselves unable to go back to some sims. This included Cyfir (Cyfiremmerich), whom couldn't get back to his home.

Read Cyfir's article in Design.
Posted by Bixyl Shuftan at 6:04 AM