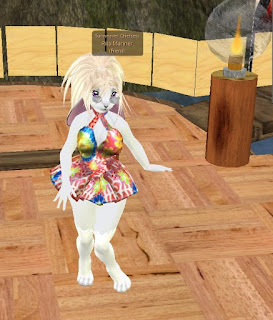 On Friday night, Rita Mariner, the leader of the Sunweaver community, got an unpleasant surprise when she tried to log in. She found her account had been blocked. So she came on with an alt that night. Her name couldn't be found in the Sunweaver group, though it was still on peoples' friend lists, leading to speculation she'd been hacked. But when she called Linden Lab the next morning, it turned out they'd suspended her due to not filing a form with the IRS.

Sunnies:  Rita discovered the reason she was blocked and took care of the issue.  Seems LL sent her an IRS Tax Form W9, via e-mail, that they wanted her to fill out.  She didn't notice it in scanning her e-mails, on her cell phone, but she found in checking on her PC.  It was dated last month.  Still Rita was upset wondering WHY they wanted the form filled out and all that sensitive, personal, info, since she didn't do business on SL, wasn't here to make money. In fact SL costs her.

At the Club Cutlass event on Saturday night, she (via the alt) talked about what was going on, "LL wanted me to fill out some IRS Tax Forms, why?  I have no clue. ... If I was making money on SL and pulling it out, I could see it, but the opposite is true, I pour money into SL every month." She stated that it was a W9 form sent in her emails, "So I filled it out and then I had to verify it again it was me. It was from a Linden. It had a ticket number. And it was in my account."

Others around were puzzled by the turn of events, one commenting ironically, "Because the IRS just KNOWS you are getting rich off SL." Another remarked, "Odd that I haven't heard of other large land-owners having issues." "Other than H and R Block, no business has demanded a tax form from me," spoke a third. "So maybe the IRS is gonna make you pay tax on the rents you collect?" someone jokingly asked. "If they try, then I get to deduct the losses," Rita answered, "which means I get a refund." "Or offer to pay them in Lindens (grin)."

Rita was optimistic, "I found the problem, filled out the paperwork, now just have to wait. ... Hopefully (by) Monday Rita will be back, now that LL has their desired paperwork."

Talk soon turned to other issues, such as the upcoming Relay season, hopeful the situation was on it's way to being resolved.