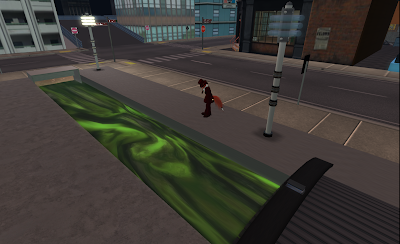 I was going about the streets of Montecito Bay the other day, when I happened to walk by the Holographic Tower that went up at the close of the UFO mystery in March 2019. Then I noticed something. The water in front of the tower, which had previously been blue, was now green.

Granted this was part of a place that had some strange origins. But still I asked. One person in the sim commented, "Maybe a crux got sick there. I have seen the things (one) eats.....scary." It was also brought up that it might be the results of a burst sewer pipe from a crux loo. But then Twocoin offered an answer, "That's my river of slime."

So how did Twocoin slime the river and for what purpose? That he hasn't revealed, yet. In the meantime, Montecito Bay has a minor mystery once again.