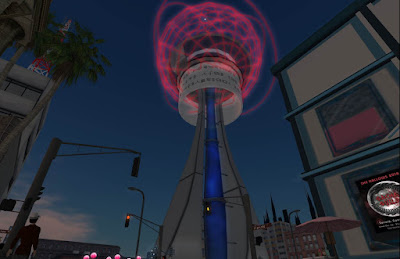 When I took a close look at the site of the UFO crash in Montecito Bay late last month, I expected the flying saucer and what appeared to be either a mannequin or a body that had somehow avoided decay to be taken away soon. And checking the place last weekend, as expected they were gone. But what I didn't expect was finding the site completely repaired and with a new tower that looked like it might have been made by someone not of this Earth.

The top of the structure was surrounded by what looked like a red holographic globe. Besides the structure was some bizarre-looking sculpture and unearthly-looking plants that had glowing leaves. Just beneath the top was a circular band that went around the tower, full of the same kind of symbols that were in club schedule updates prior to the Groundhog Day incident.

There didn't seem to be an obvious way up. I did see a pad that looked a little like those transporter pads in science-fiction shows. A way to the top of the tower? I hesitated to find out.

Another thing I noticed, or rather didn't notice, were the "street circles" in the pattern of crop circles that had been on town intersections for months. They were now all gone. 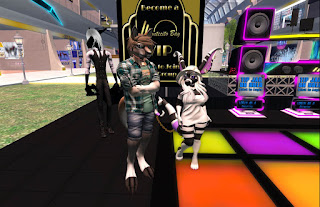 So what does this all mean? I had a few words with town mayor Lem Aiko (LemonPledge Resident), who told me that "Official statement, it was swamp gas," and wasn't in a position to say more. But he did get me in touch with someone who was willing to speak under a condition of anonymity, saying that they had been told to say nothing by the Feds, "I know what I know, and you saw what you saw. It was indeed E.T. but this time they waged war on our city. I was there when they shot the city up in their UFO's. why would they do that if it wasn't an act of war? We still don't know why the UFO went down, or even why they were here in the first place." Someone with him thought the saucer probably went down due to pilot error, though it was a guess. A second person joked, "I think they were going for the irresistible hot dog cart and totally missed, but that's just me."

Of the strange tower that suddenly went up, "The crazy guy who I made mention of before says the building was a peace offering. He was right last time, I would believe him about that. I just hope they don't do it again. It cost the city millions. That is also why we are redeveloping the area that was bombed. the UFO attack so severely damaged the infrastructure in that part of the city, it's cheaper to completely scrap the design and move on to something new."

So is this the last we'll hear about flying saucers around here? With that strange tower, I hesitate to say. Even so, Montecito Bay never seems to be quiet for very long. Something strange usually happens just after things begin to settle in a routine. There's already reports of strange small creatures that speak with a lisp and have a craving for clams and other shellfish. And of course, there's what will be going up in place of the torn town buildings, whatever it is.

Montecity Bay, signing off, for now.

Note: There was no actual alien attack, just people having some fun.