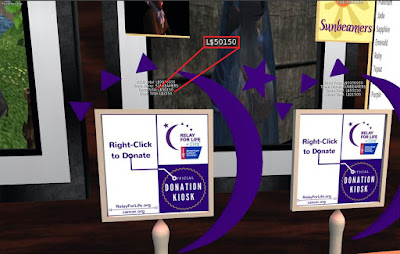 The Relay for Life's team of the Sunweaver community has gone up a notch. On Wednesday night, the total amount of Lindens raised for the Sunbeamers reached 50,000, or Silver rank, followed by an announcement.

Beamers:  We are now SILVER level and both Bixyl and Liska are now tagged with going 4 weeks each, on their BID MEs.  Bwahahahahahaha!!!!!!!!!!!!!!

As Team Captain Rita Mariner hinted at, much of the money came from donations to the "Bid Me Human" and "Bid Me Deer" fundraisers. The team total has continued to grow, as of the writing of this article, almost 53,000 Lindens. A number of other teams have also reached Bronze and Silver ranks.

So what happens after March 15 for the two volunteers? Time will tell.
Posted by Bixyl Shuftan at 6:05 AM