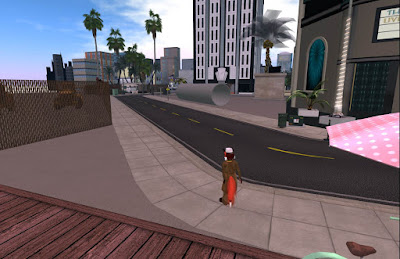 Since my last look at Montecito Bay's damaged corner a week and a half ago, work has continued on the cleanups and repairs. The severely damaged buildings have been torn down. Although some of the area remains fenced off, a road and sidewalk now goes through what used to be rubble. While much remains to be done, much progress has been made.

But Montecito Bay being Montecito Bay, it didn't long for me to find some kind of weirdness. I noticed what looked like a severed horse's head in a burning bonfire. Was some mafia don wannabe trying to make an offer the town couldn't refuse? Or perhaps someone got the place confused with Nags head North Carolina? Since I didn't see who put it there, or who lit the fire, no idea, at least for now.

Running into Moff (MoffettMephit Resident), he did tell me there was an update on the "UFO crash site." "The Galleria site is cleaned up," he told me, "and the authorities are about to remove that thing." They still won't let the townsfolk what it is, "officially, we don't know what's going on at that site. But thankfully they seem to be finishing up and, we are hoping we'll have that part of our town back soon." As for their reaction to press coverage, "They did rough up Lem, tho, trying to figure out how the press got in (grin). Cuz, ya know, he's also the Mayor." He then backtracked a bit, "I'm sure it was just a thorough questioning with an order to never discuss what was said."

Stay tuned for more when additional information is available.

Note: The sim wasn't really griefed, or were any authorities for real involved. Just the people behind the sim having a little fun.