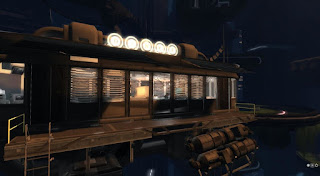 
Role-playing is one of the many ways in which Residents choose to spend their time in Second Life. From supernatural fairy tales to gothic vampires and medieval battles, there are long-standing communities and Regions built around elaborate and rich lores. It is possible to visit any of our over 200 Role-playing communities and find your niche.
“You’re not just there as a bystander … you’re creating worlds.” says Stark Osterham in the video below.
This week’s Destinations video takes a glimpse into InSilico, which is one of the longest running role-playing communities in Second Life.
InSilico is an immersive,  futuristic, cyberpunk world full of interesting characters who operate beneath a dark, foreboding skyline and airships. InSilico is a painstakingly detailed space that you will want to explore, photograph, and you may just find yourself swept into the story as a participating citizen.

It should be noted Linden Lab came close to indirectly shutting down Insilico in March 2016 when it decided to ban the owner of the sims, the controversial Skills Hak. Despite that the Lab allowed for the transfer of the sims to one of the administrators, Insilico never did recover from the disruption and several months later in October was on the verse of shutting down. But in what could only be described as a Christmas miracle, the roleplay was given a cash infusion by a mystery benefactor in late December. Apparently since then, things have gone back to normal for the roleplay, and the players are continuing to enjoy themselves.