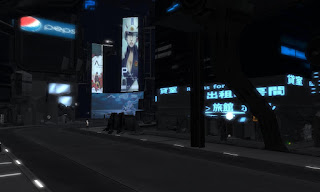 Good news for fans of the sci-fi Insilico roleplay area. The sims have been saved, and it appears money is no longer an issue, at least for the forseeable future.

The region and roleplay community, founded in 2008, has had a rough year, with the sims being taken offline after it's owner, Skills Hak, was banned from Second Life. But thanks to some negotiations behind the scenes, Linden Lab was willing to transfer the sims to administrator Abeus Madruga. But unfortunately it was proving more and more difficult for the community to keep their sims financed. And it October, it was announced that the region would soon be closing. As time went on, the roleplay began to prepare for the end, but still hoping for a last-minute reprieve.

And in what can only be called a Second Life Christmas miracle, one arrived. Abeus wrote the following in the community blog:

I had planned to make this announcement through some rousing “Apocalypse Canceled” type of post, but that would certainly be anticlimactic at this point.  Anyhoo, yeah…SURPRISE and Merry Giftmas! INSILICO is here to stay (again)! It just took a while to get all these ducks lined up. Suffice to say though, it’s pretty much official. We live on.

So what does this mean to you, as players? Well, it simply means that you and your characters get to live on too! This world won’t be ripped out from under your feet, and there won’t be any major shakeups/downs/outs. The Southeast AI arc was put in place as a potential catalyst for the city’s evacuation if it came to that, however we also intentionally left it open ended. It will now continue on however it naturally will ...

Although Abeus didn't mention all the details, what he stated next means it looks like whoever sent the cash will be continuing to do so, and enough so they they don't have to worry about raising money.

The biggest change coming through is that we can now strive be nearly 100% RP focused. Without the need to continually generate revenue from rentals/sales/donations, we have been freed to divert our energies into more important things. Traditional rentals will be replaced with residential/RP locations made available to active players...BUT more on that later as we actually work out those details.

For the players of Insilico, this is certainly good news. Exactly the nature of the help was speculated about by Hamlet Au, who thought it could have been someone donating the cash no questions asked, or possibly an investor hoping to get money from the roleplayers through playing fees.

While the last word has yet to be revealed, it looks like this noted roleplay and region, once considered among the top ten places in Second Life to photograph, will be sticking around for it's tenth year. And for those keeping up with gridwide news, it looks like 2016 will be ending on a high note.