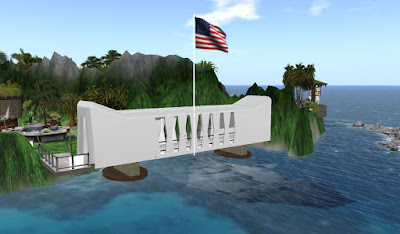 For several years, Second Life had a replica of the USS Arizona Memorial, which stands over the wreck of the USS Arizona, which exploded and sunk during the attack on Pearl Harbor on December 7, 1941, taking with it nearly 1200 lives, about half of those killed in the battle. Located in the Oahu sim, there would be a few events there on anniversaries at the virtual memorial, such as the one on the 70th anniversary of the attack. While the memorial was up last year, sometime between last December and Memorial Day 2016, the sim went offline, taking the memorial with it.

With two sims recently brought back from the virtual nether, how likely is it the memorial will be back? In my opinion, iffy as unlike the Vietnam Veterans Memorial, Oahu wasn't a memorial sim, but a residential sim with a memorial. It is possible Linden Lab might contact the owner and find a place for the memorial without having to bring back a whole sim. But then again, Mont Saint Michael was looking like it was lost for good a few months ago.