THE "PRIM DROP" IS UPON US 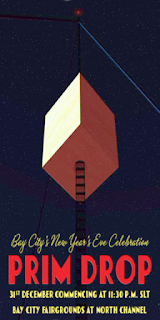 BAY CITY, SL (26th December, 2015) - Citizens of Bay City, Second Life's® city by the bay, will be marking the end of the year in fine fashion, attending the annual "Prim Drop" in the Bay city Fairgrounds in North Channel on the evening of the 31st of December. The party will include an hour-long set of DJed tunes presented by Marianne McCann, as well as fireworks and other festive fun. Food and drink will also be provided for all attendees.

As of the 24th of December, Bay City has raised L$151,408 for Child's Play Charity through their annual silent auction and tree lighting concert, as well as other local events.

For more information,  please contact Marianne McCann.
Posted by Bixyl Shuftan at 6:00 AM